Join Howard Gardner and Gary Stager in Conversation on December 2, 2020 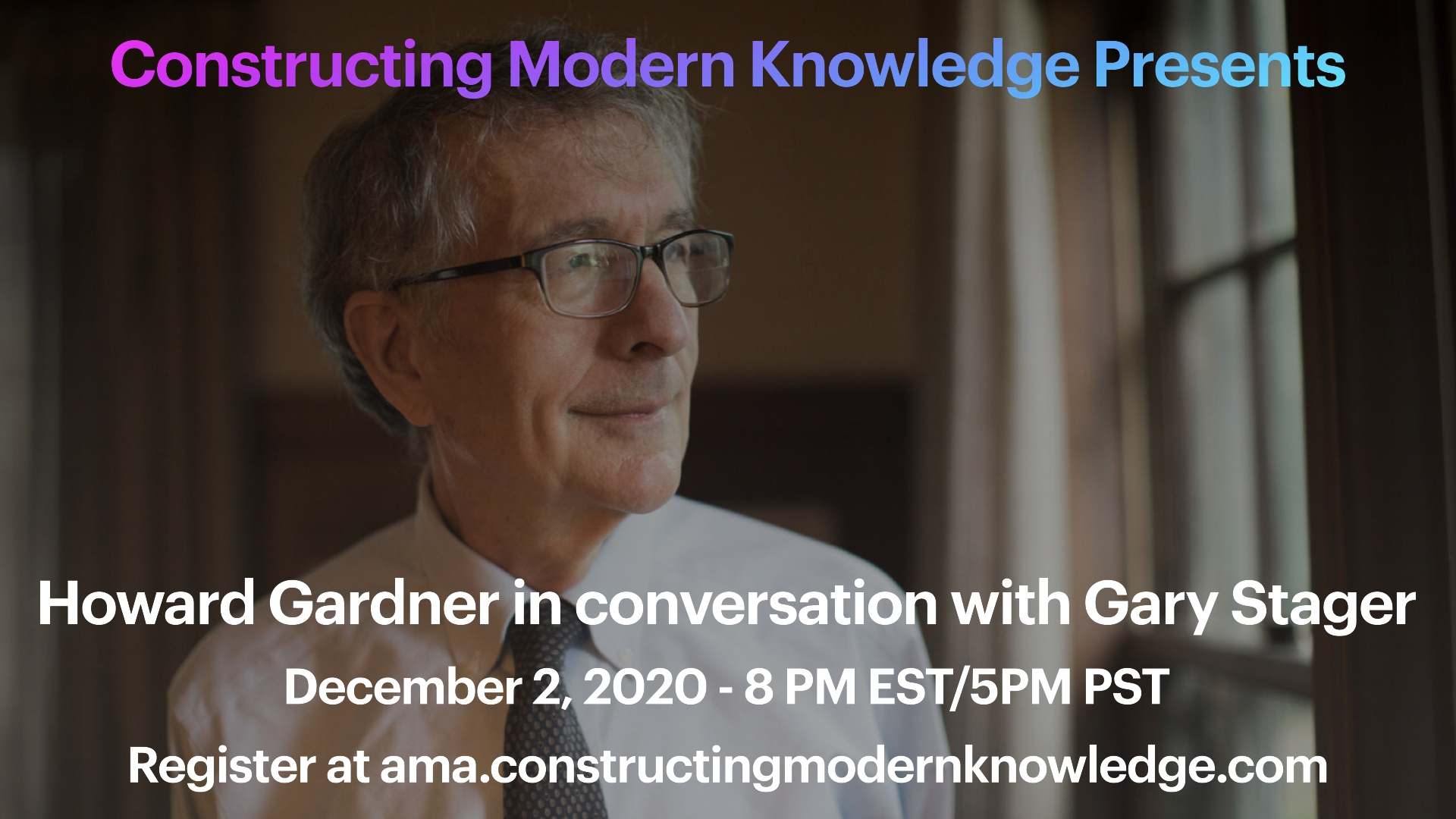 Constructing Modern Knowledge is thrilled to share one of the most profound thinkers of our age with educators during our December 2nd Ask Me Anything session with Professor Howard Gardner. Register here, if you have not already done so.

Dr. Gardner is the author of a delightful new book, A Synthesizing Mind: A Memoir from the Creator of Multiple Intelligences Theory. We highly recommend you read the before and after our online event. In fact, it would make a lovely holiday gift for the other educators, creators, and thinkers in your life.

Howard Gardner is the John H. and Elisabeth A. Hobbs Research Professor of Cognition and Education at the Harvard Graduate School of Education. He is also an adjunct professor of psychology at Harvard University and senior director of Harvard Project Zero. Among numerous honors, Gardner received a MacArthur Prize Fellowship and a Fellowship from the John S. Guggenheim Memorial Foundation in 1981 and 2000, respectively. In 1990, he was the first American to receive the University of Louisville’s Grawemeyer Award in Education. In recognition of his contributions to both academic theory and public policy, he has received honorary degrees from thirty-one colleges and universities, including institutions in Bulgaria, Canada, Chile, Greece, Ireland, Israel, Italy, South Korea, and Spain. He has twice been selected by Foreign Policy and Prospect magazines as one of 100 most influential public intellectuals in the world. In 2011, Gardner received the Prince of Asturias Award for Social Sciences, and in 2015, he was chosen as the recipient of the Brock International Prize in Education. He has been elected a member of the American Academy of Arts and Sciences, the American Philosophical Society, the National Academy of Education, and the London-based Royal Society for the Encouragement of Arts, Manufactures, and Commerce. He serves on a number of boards, including New York’s Museum of Modern Art and the American Philosophical Society.

The author of thirty books translated into thirty-two languages, and several hundred articles, Gardner is best known in educational circles for his theory of multiple intelligences, a critique of the notion that there exists but a single human intelligence that can be assessed by standard psychometric instruments (please see multipleintelligencesoasis.org). Since the middle 1990s, Gardner has directed The Good Project, a group of initiatives, founded in collaboration with psychologists Mihaly Csikszentmihalyi and William Damon, that promotes excellence, engagement, and ethics in education, preparing students to become good workers and good citizens who contribute to the overall well-being of society. Through research-based concepts, frameworks, and resources, the Project seeks to help students reflect upon the ethical dilemmas that arise in everyday life and give them the tools to make thoughtful decisions.

His newest research undertaking is a large-scale national study documenting how different groups think about the goals of college and the value of a course of study emphasizing liberal arts and sciences. The study seeks to understand how the chief constituencies of campuses—incoming students, graduating students, faculty, senior administrators, parents, alumni/ae, trustees and job recruiters—think about these changes and how they may impact the college experience in our time. Ultimately, the study aims to provide valuable suggestions of how best to provide quality, non-professional higher education in the 21st century.

In addition to being a popular keynote speaker at some of the world’s most prestigious education conferences, Gary Stager is a journalist, teacher educator, consultant, professor, software developer, publisher, and school administrator. An elementary teacher by training, he has taught students from preschool through doctoral studies. In 1990, Dr. Stager led professional development in the world’s first laptop schools and played a major role in the early days of online education. Gary is the founder of the Constructing Modern Knowledge summer institute for educators.

Dr. Stager is co-author of Invent To Learn – Making, Tinkering, and Engineering in the Classroom, called the “bible of the maker movement in schools,” by Larry Magid of CBS and The San Jose Mercury News.

Dr. Stager’s work has earned a Ph.D. in Science and Mathematics Education and he collaborated on a project that won a Grammy Award. Recently, Gary was invited by Fondazione Reggio Children to lead a public seminar on education in Reggio Emilia, Italy.

Gary is also on the advisory board of the NSF-funded project, BJC4NYC: Bringing a Rigorous Computer Science Principles Course to the Largest School System in the US. Dr. Stager also maintains the world’s largest archive of text and multimedia by Seymour Papert at The Daily Papert.

Constructing Modern Knowledge, July 13-16, 2021 is a minds-on institute for educators committed to creativity, collaboration and computing. Participant have the opportunity to engage in intensive computer-rich project development with peers and a world-class faculty. Inspirational guest speakers and social events round out the fantastic event.

While our outstanding faculty is comprised of educational pioneers, bestselling authors and inventors of educational technologies we depend on, the real power of Constructing Modern Knowledge emerges from the collaborative project development of participants.Rather than spend days listening to a series of speakers, CMK 2021 is about action. Attendees work on personally meaningful projects and interact with educational experts concerned with maximizing the potential of each learner. Animation, robotics, engineering, film-making, music composition, 3D printing, programming, wearable computing, Arduino, BBC micro:bits, microcontrollers, storytelling, and photography are all part of the CMK 2021 mix. The learning environment is filled with stimulating “objects to think with,” including a library, art supplies, and a mountain of tools & materials for tinkering. Constructing Modern Knowledge, now in its 13th year, is a minds-on institute for educators committed to creativity, collaboration, and computing. Inspirational guest speakers and social events round out a fantastic event.

See what makes Constructing Modern Knowledge unique by checking out the CMK wrap-up. 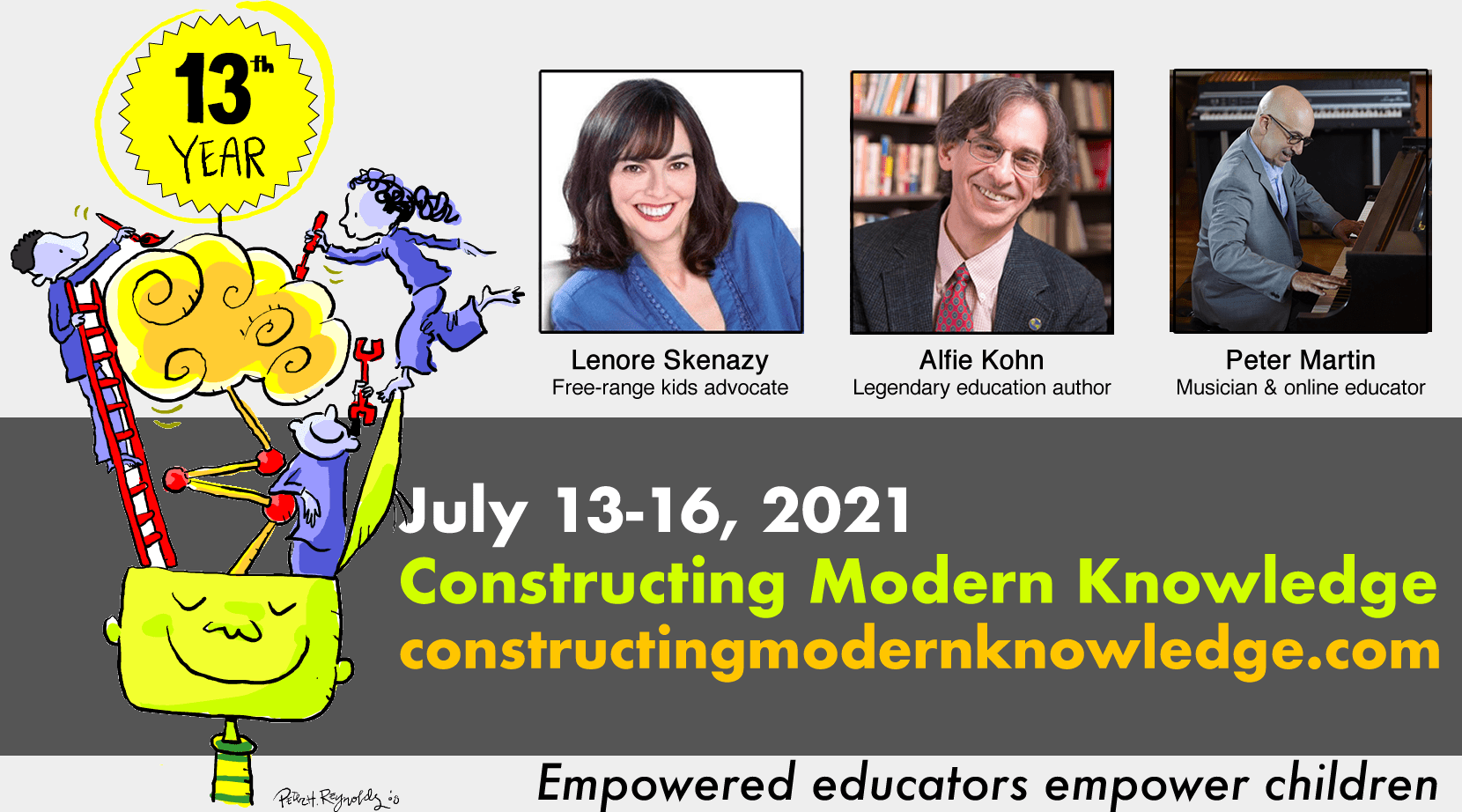